Developer/coding bootcamps are incredibly popular right now. That should not be a surprise to anyone. Software development is an incredibly lucrative field. There is a much greater demand for talent than there is supply. I’ve seen that from both the hiring side and the job applicant side. It makes sense that a lot of folks out there are interested in becoming software developers. Bootcamps are there to help fill the demand for that education. $20,000 for a bootcamp sounds like a lot, but it is a lot less than $80,000+ for 4 years of college.

The point of contention is: can someone be as qualified after going to a 6 month bootcamp than someone who spends 4 years in college?

Many do not think so. An in-house recruiter I worked with often asked our organization to keep an open mind about bootcamp graduates. This was because other members on the team would rule out applicants solely because they had attended a bootcamp.

Part of that mentality was due to a saturation of candidates. Many bootcamps, though not all, are “dev mills” . Their goal is to get people in and out of the bootcamp. The bootcamp earns tuition regardless of whether the students get jobs after graduating or not. Many bootcamps also make unreasonable promises. “Come to our bootcamp and make $100K+ after 6 months!” They sell the dream and make it sound like it will be easy. 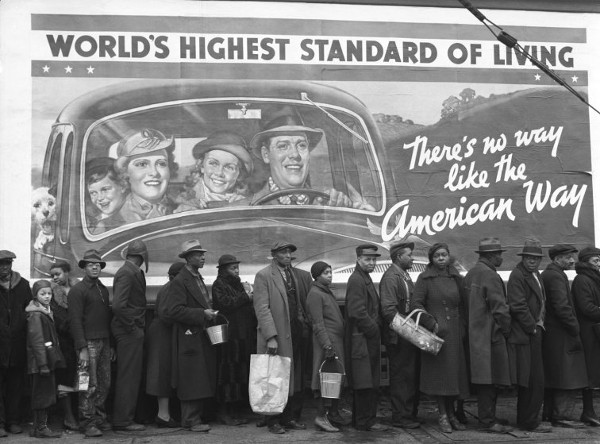 Photo from the Great Depression
The result is a large number of people who assume they can go to the bootcamp, complete just the coursework, and then be ready for a job. Unfortunately, just doing coursework doesn’t cut it. The result is hiring teams are overwhelmed with the quantity of unqualified candidates.

The catch? My point on coursework applies to 4 year degrees as well. There are also plenty of 4 year college graduates who are also unprepared for professional work upon graduation.

Software development is a great field to be in for many reasons, but it is also hard. I won’t go so far to say that you HAVE to love the work. Yet, you DO have to be interested. The field changes often. Developers need to constantly learn and get better at their craft, or they will be quickly left behind by their peers. The education a developer gets, regardless of the source of education, can never teach everything they will need to know. Education serves as a foundation for additional learning. That additional learning is what makes candidates qualified for a developer job.

Filtering job applicants by bootcamp graduate or college graduate reminds me of companies who filter job applicants by GPA. There are plenty who only hire those with 3.5 GPAs or 3.0 GPAs. I found this to be a useless metric. I once interviewed a slew of candidates from the same university. What I found interesting was that many of the candidates with great GPAs could only give me textbook answers to my questions. I would ask “how have you designed some of your software projects?” The responses I got were textbook definitions of software design patterns. If you had told me before that experience that multiple people would just recite definitions from textbooks, I would not have believed you. Imagine my surprise after that day.

Many of the students who were barely passing their classes gave me fantastic answers to that same question. They would talk about their projects, what they think went well, what mistakes they think they made, and what they would do different in the future. Instead of reciting what the factory design pattern was, they could give me an example of how they used it and why they chose it. Those are the kind of developers I want to work with.

That experience alone made me think differently about bootcamp graduates than some of my peers. If the GPA filter is useless, why is the bootcamp filter any different?

I have interviewed some really phenomenal candidates that had gone to bootcamps. One in particular told me that she chose not to use a framework for her first few projects even though her instructors told her to. She wanted to see what difficulties she would encounter without that framework. Only then would she truly understand the value that the framework would give her. She chose to gain a deeper understanding of the technology used in software development rather than blindly do what she was told.

That is the mentality required to be a great software developer. Whether a person has that mentality does not correlate with going to a bootcamp or going to college. The coursework alone will never prepare someone for a job regardless of how comprehensive it is. Once again, the goal of education should be to serve as a foundation for more learning later on. The will to seek out additional knowledge depends on the individual, not their source of education.

In the end, the answer to the question “Should You Hire a Bootcamp Graduate?” is yes. Because it doesn’t matter if someone graduated a bootcamp or not. We should evaluate all candidates on the same factors that determine whether a person is a good developer. Can they write good code? Do they understand the fundamentals of software development? Do they continue to learn new things over time? Those are the questions that matter. Who the individual person is matters. The question of where someone received their education is worthless.